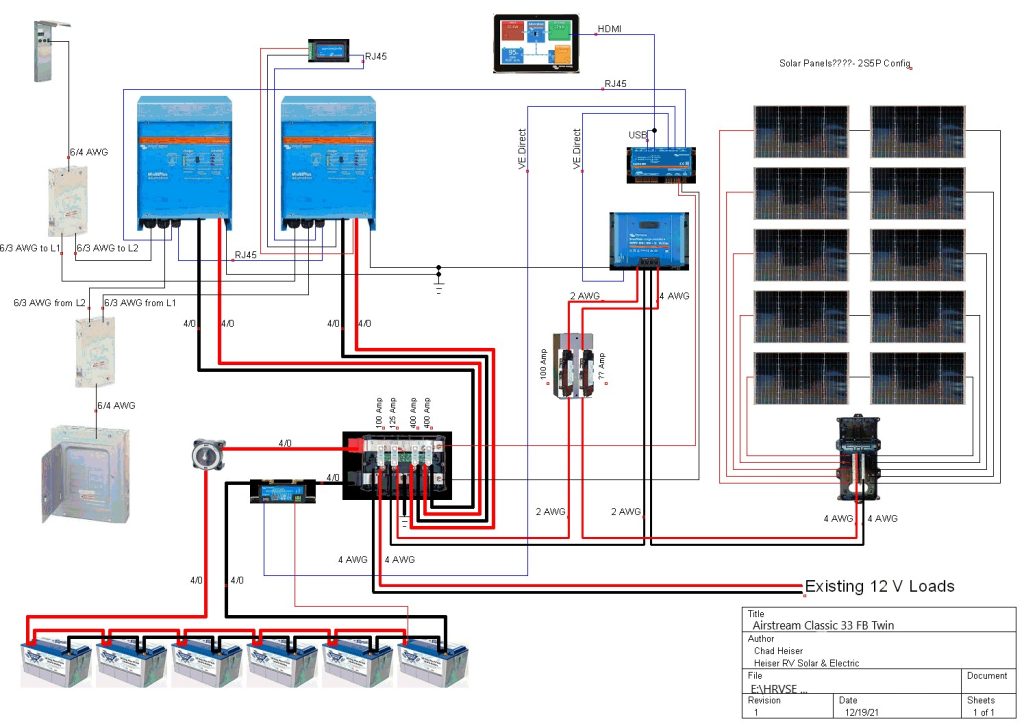 This installation was completed in January of 2022.  The owners of this Airstream were referred to me by Battle Born Batteries.  They purchased a kit from Battle Born directly that included dual Victron Multiplus Inverters, six heated 100 amp hour Battle Born batteries, and various other Victron components.  After they ordered the items, they began looking for an installer to do the installation.  They were located in Arizona at the time.  They live full time in their RV and had a timeline that dictated they needed to be in Texas soon.  They wanted to get their new system installed before they moved on to Texas.  Unfortunately for them, they could not find any installers in their area able to get the job done on their timeline.  Their Battle Born sales rep referred them to me as a possibility to do the installation.  They contacted me and we spoke about their needs.  In addition to the kit they purchased from Battle Born, they also wanted to add solar panels to the system.  I talked with them about their needs and gave them a proposal for the complete system installation.  Luckily I had an opening for the installation that fit in their timeline.  They decided to come to me for the installation.  I ordered the solar panels and began the installation once they (and the customers) arrived.  The Airstream had no available storage areas in which to install the equipment.  It did have a couch along the passenger side of the trailer with a large open area underneath it.  I was able to dismantle the couch and install all the major components in that area.  Everything but the solar controller fit under the couch.  I installed the solar controller under some drawers in a cabinet on the opposite side of the trailer.  Luckily there was a wire chase in place under the trailer floor that ran from the cabinet where I put the solar controller to the dinette next to the couch.  This made connecting the solar controller to the battery bank fairly easy.  I was also able to find a sewer vent pipe in a closet on the driver side of the trailer.  I was able to run wire alongside this pipe up to the roof of the trailer.  I placed the roof combiner box next to the vent pipe protrusion on the roof and terminated the wire in the combiner box.  This is the only penetration I made in the roof (to pass the wire from the trailer interior into the combiner box).  This wire then fed through cabinets directly to the solar controller.  The solar panels were mounted to the metal roof of the trailer with VHB tape.  All components and wiring inside the trailer were able to be completely hidden from view in this installation.  The only components visible within the trailer are the Touch 50 display and BMV 712 display.  These were both mounted on the wall along side the couch where other control modules were mounted.  Considering how little perceived room the Airstream had, the customers were very happy with how everything was installed and hidden.