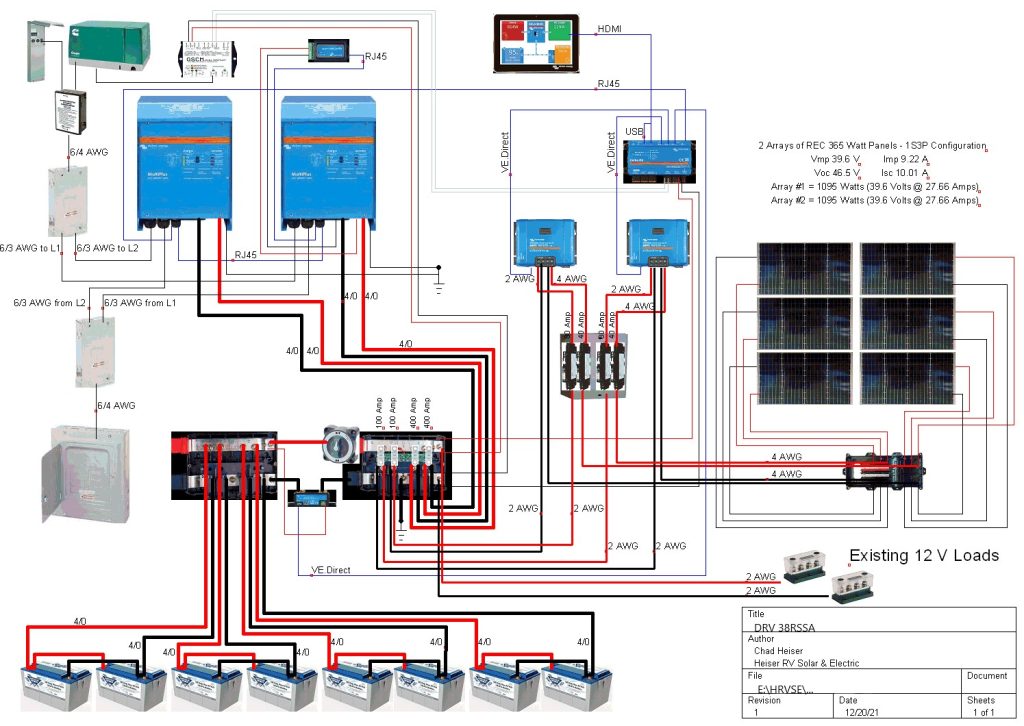 This installation was completed in February of 2022.   The owners of this rig contacted me in late 2021 and we discussed options for their DRV.  They already had six Battle Born batteries, but nothing else for their system.  Based on our conversations, I came up with a dual inverter system plan with full integration into the RV, including generator control and remote connectivity options.  The customers agreed to the plan and we set an installation date in February of 2022.

I removed the two OEM six volt batteries and battery slide tray from the battery compartment on the off door side of the trailer (under the 5th wheel overhang).  I installed two bus bars in that compartment for all the existing 12 volt connections to the old  batteries.  I connected the new bus bars to the new Lynx distributor.  This opened up the OEM battery compartment for additional storage space to help mitigate some of the lost space in the basement.  The customer had an existing Zamp portable suitcase solar panel set up that connected directly to the batteries in this compartment.  The Zamp set up now connects to the new bus bars and can still be used to augment the large solar array on the roof.

I installed six 365 watt REC solar panels on the roof of the 5th wheel.  I installed the solar panels in two separate arrays of three panels each.  Each array runs the panels in parallel.  I used a single AM Solar combiner box with a second set of bus bars to connect the two separate arrays.  I ran two sets of 4 AWG wire down from the combiner box to the solar controllers in the basement.  The wire run from the roof to the basement was made in the corner of the washer/dryer closet in the bathroom of the RV.

The only issue I had with this installation was not related to the installation at all.  When I put the bedroom slide out, the bed platform separated from the slide.  I did some investigating and determined DRV used only two screws on each side of the platform to secure it to the floor of the slide out.  Over time, these four screws sheered and allowed the bed platform and the slide out to separate.  I was able to reattach the platform to the slide out floor and added additional connectors to (hopefully) prevent this from happening again.