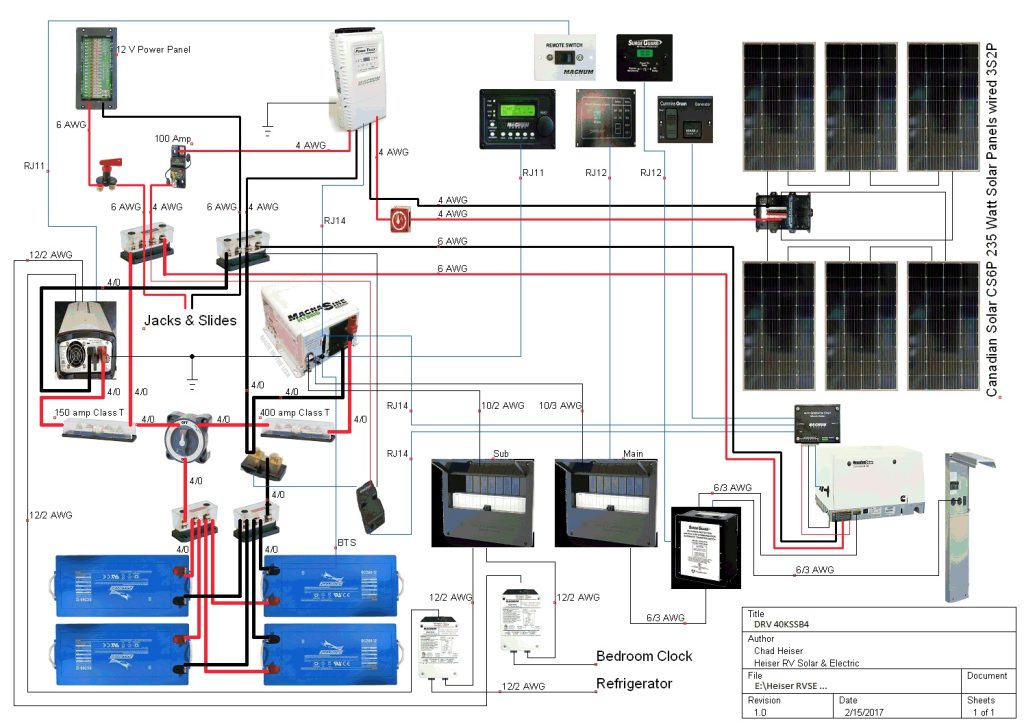 This installation was completed in February of 2017.  We factory ordered this 5th wheel with this installation in mind.  I had many conversations with the dealer (Rolling Retreats) and DRV about the order and the customizations they could do to facilitate the installation.  I began collecting parts for the installation while the 5th wheel was being built.  I had DRV add the inverter, battery monitor, remote, AGS and the accompanying parts at the factory.  I also had them increase the size of their standard solar prep wiring from 10 awg to 4 awg.  In a typical large inverter installation from DRV, the factory installs four deep cycle batteries.  They split the batteries into two separate pairs though.  One pair is installed on the driver side of the trailer and has the main 12 volt loads wired to it (jacks, slides, 12 volt panel).  The other pair is installed on the passenger side of the trailer and has the inverter connected to it.  These two battery pairs are then connected in parallel to work as a single bank.  Unfortunately this wiring does not allow the BMK shunt to properly measure all the 12 volt loads in the trailer and it was not the way I wanted my system to be wired.  Instead of the standard wiring, I had DRV run all 12 volt connections to the passenger side of the trailer and I had them deliver the trailer with a single 12 volt battery.  I planned to immediately remove that battery and install my own large battery bank and this made that process much easier.  When the trailer arrived at Rolling Retreats, I loaded up my batteries and other parts to connect them and headed to the dealership.  I prebuilt the battery boxes based on measurements I received ahead of time.  Upon arrival, I installed the batteries and redid the wiring in the 5th wheel to connect the batteries.  My batteries were much larger than the standard batteries used and would not fit in the OEM battery locations.  My new batteries were installed in the basement of the 5th wheel and I used the passenger side OEM battery compartment as my 12 volt connection center.  I added bus bars, breakers, switches, a second inverter dedicated to the residential refrigerator in this location.  I added the solar controller the inverter in the basement.  The driver side OEM battery compartment was repurposed as a storage compartment.  I did this while I stayed in the trailer at Rolling Retreats to test all the other systems and make sure it was ready for use.  Once the trailer passed inspection by me and Rolling Retreats, I returned home and completed the remainder of the installation by adding the solar panels.

In October of 2021 I decided to upgrade the solar panels.  I went from 1410 watts of available power (six 235 watt Canadian Solar panels) to 2190 watts of available power (six 365 watt REC panels).  I did this for a couple of reasons.  First and foremost was because I had the REC panels readily available to me.  Second was because there were occasions when I needed more production than I was getting from the original panels to keep up with power usage in the trailer.  These occasions were mainly during fringe production days due to inclement weather, but I don’t like changing my usage habits based on external factors.  Four of the new panels went on relatively easily.  The center two panels took a little extra work.  The new panels were about the same width as the old panels, but they were about 15 inches longer.  This added length necessitated moving the antennas (OTA, Dish Trav’ler and WiFi Ranger) on the roof to make room for the panels.  None of this was difficult to do, it just took some extra time and left some extra holes on the roof to be patched as a result.