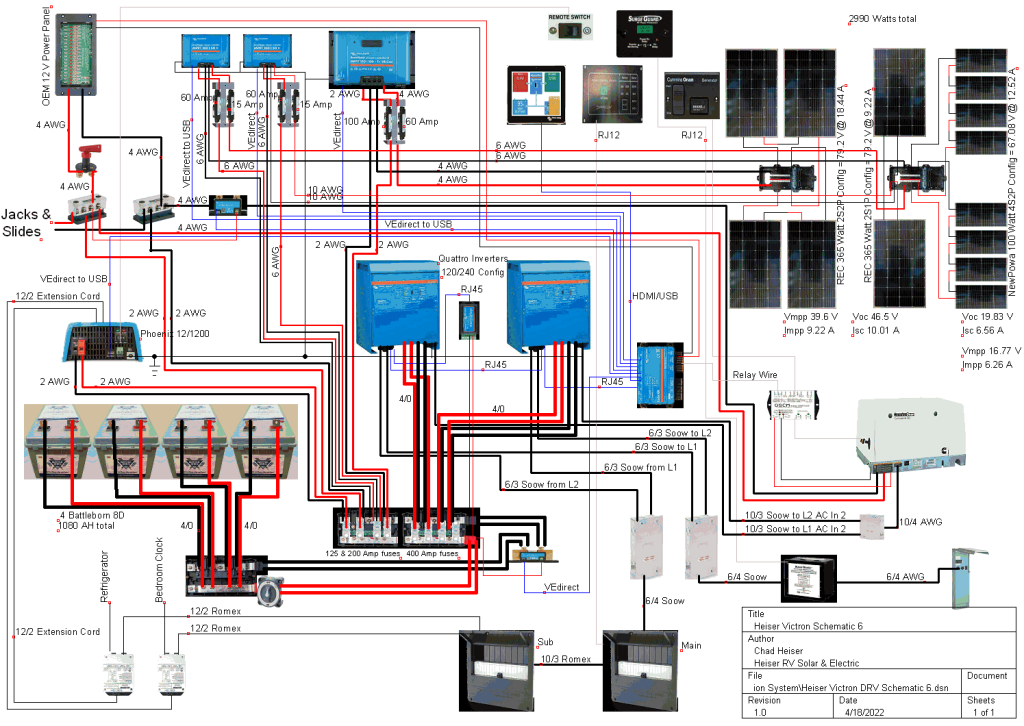 This installation was completed in November of 2021.  We factory ordered this 5th wheel back in 2017 and originally installed a complete Magnum Energy inverter and solar system with a large AGM battery bank.  After I started Heiser RV Solar & Electric, I decided to upgrade the Magnum based system to a larger Victron based system.  I was happy with the Magnum system overall, but Magnum does not offer the connectivity and monitoring capabilities that Victron does.  This was a primary reason I decided to upgrade.  I also wanted to design and build a large capacity 12 volt based system to show the possibilities to others.

I started by upgrading the solar panels from six Canadian Solar 235 watt panels (1410 watts) to six REC 365 watt panels (2190 watts).  I then switched out the Magnum equipment for Victron equipment.  The solar panels power a Victron SmartSolar MPPT 150/100.  This controller is slightly “overpaneled” by this array, but it is still within the voltage and amperage specifications.  Over-paneling a solar controller can help with solar production in off peak hours and less than ideal solar conditions.  I used a Midnite Solar Baby Box with MNEPV DC breakers to isolate the power feed from the panels to the solar controller and then the power output from the solar controller to the battery bank (via the Lynx Distributors).

The new system is powered by four Battle Born 8D lithium batteries.  These batteries have 270 amp hours of storage capacity each (1080 total amp hours) and can supply 300 amps continuous output each (1200 amps total).  These batteries replaced four AGM 8D batteries with a total capacity of 1040 amp hours (half of which was usable).  The old batteries had half the available capacity of the new batteries and weighed nearly 700 lbs.  The Battle Born lithium 8D batteries weigh only 325 lbs. total.  The new battery bank weighs less than half the weight of the old bank with double the usable storage capacity.

The batteries provide power for two Victron 5KVA Quattro inverter/chargers.  That is 10KVA of available power (8K watts continuous).  This is significantly more than the single 3K Magnum inverter/charger I had in the previous system.  For comparison sake, a 50 amp power pedestal can provide up to 12K watts of power and a 30 amp power pedestal can only provide up to 3600 watts of power. The Quattros are wired in split phase to provide 120/240 volt power.  They are wired in between the OEM transfer switch and the main power panel.  The wiring runs through two load centers.  These load centers take the four wire power feed (L1, L2, N and G) and split it to L1, N and G out to inverter one and L2, N and G out to inverter 2.  The outputs from those inverters then go back to the second load center and get recombined back to a four wire feed to the main power panel.  The old sub panel was then wired directly to the main power panel to combine the two panels into one large panel.

In addition to the dual Quattros, I also have a Phoenix 12/1200 inverter dedicated to the residential refrigerator and a single 120 volt outlet in the bedroom.  I left two Magnum Energy transfer switches from the old system in place on these two circuits.  These transfer switches automate the switching of power between the different inverter power sources.

All of the Victron componets are connected to a Cerbo GX communication device (with the exception of the Phoenix inverter which uses a VE.Direct Bluetooth Dongle).  The Cerbo GX collets data from the Victron components and allows central control of them.  The data can be accessed via the attached GX Touch 70 (seven inch) display, remote console via a local WiFi connection on portable devices or via the online VRM portal.  All of the components can also be accessed via local Bluetooth connections through the Victron Connect App.  Bluetooth connectivity is either built into the individual components or added via a Bluetooth dongle.

In addition to the Victron components, I added an Atkinson Electronics GSCM Mini generator control module.  This module is installed in line with the control cables for the on board Onan 6500 watt 120/240 volt generator.  The GSCM Mini takes the NO/NC signal from the controllable relay built into the Cerbo GX and converts it into a signal the Onan generator can understand to start and stop the generator.  The Cerbo GX has a number of programmable conditions that can be set to turn on/off the generator.  It is a very clean way of automating control of the generator through the Victron system.  I also rewired the generator AC outputs from the OEM transfer switch directly to the AC2 In on each of the Quattros.  This allows the system to individually track shore power and generator usage.  I used a metal junction box to split the four wire generator feed into a six wire feed similar to the main power feed to the Quattros I described above.  The Quattros have a built in transfer switch and can accept two separate AC power feeds.  The generator power then passes through the Quattros and on to the main power panel through the existing Quattro wiring.

In May 2022, I added eight additional solar panels to my system.  They were 100 watt compact Newpowa solar panels.  They filled in the remaining open spaces on the roof of my RV very nicely.  I also split the six existing REC solar panels into two separate arrays, one with four panels in series parallel configuration and one with two panels in series.  The new Newpowa panels were installed in two series strings of four panels each.  The two REC panels in series went to a new 100/50 MPPT smart Solar controller and the Newpowa panels also went to a new 100/50 MPPT smart solar controller.  The three separate solar arrays total 2990 watts of solar on the roof of the RV.

Victron also upgraded the software on the Cerbo GX and SmartShunt to allow SmartShunts to be used as energy meters in addition to battery monitors.  I added a 500 amp SmartShunt to the system and installed it in the line feeding the RV’s 12 volt power.  Now the Cerbo displays an actual (measured) DC Load rather than a calculated DC Load.  This makes the information on the Cerbo more accurate for non=monitored components.  All the non-Victron DC power runs through the new shunt and the system can now exactly measure all that usage.