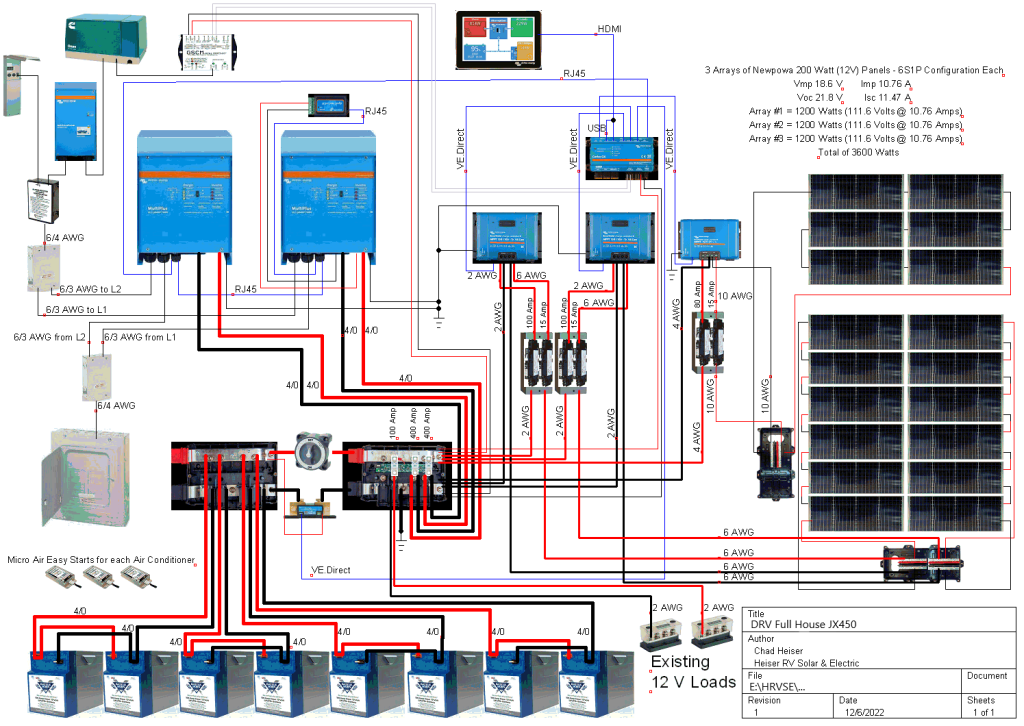 This installation was completed in December of 2022.  I began communicating with the owners of this rig in January of 2022 about a system and installation.  For various reasons, the owners where unable to bring the rig to me until December.  The owners wanted a robust system that could handle running an air conditioner or two and keep them going like they were plugged in, whether they were or not.  I put together a system proposal consisting of dual 3KVA inverters, 3600 watts of solar and 800 amp hours of lithium batteries (among other things).  Based on our back and forth conversations, they accepted the proposal and we eventually set an installation date.

This RV was used, but was new to my customers.  They were new full time RV’ers and this unit was their only home.  They were eager to get their system installed so they could test it out over the winter in Arizona.  The installation went pretty smoothly.  The RV had one set of 10 AWG wire pre run from the roof to the OEM battery compartment from the factory.  I utilized this wire for the smaller solar controller and pulled two additional runs 6 AWG wire from the roof for the two larger solar controllers.  This system evolved over time before the owners brought the RV to me.  The initial solar configuration was going to consist of 2800 watts of solar.  After receiving detailed measurements of the RV roof from the customers, I pointed out I could fit up to 1200 additional watts of solar if they would like.  They agreed to add the additional solar panels and a third controller to handle them.

Once they arrived, I spent the first day of the installation coming up with the best layout for all the batteries and system components in the basement of the RV.  DRV 5th wheels and toy haulers do not have any hidden spaces behind walls to place components so they all have to go in the OEM storage compartments.  I did my best to limit the amount of storage space lost.  This RV had an existing Magnum MMS-1012 pure sine wave inverter charger and a converter from the factory to power the residential refrigerator and charge the batteries.  I left this inverter in place and functioning.  This allows the owners to turn off the new, larger Multiplus inverters during travel or when trying to conserve power and let the small inverter keep the refrigerator running.  I have a similar set up in my personal RV and it is a nice option to have.  I disabled the charger function of the small inverter, but it can be re-enabled as a back up.  I also unplugged the OEM converter, but left it in place as a backup battery charger if needed.

The installation had some delays due to weather, but overall it was completed in six work days over approximately a ten day period.  The customers were very happy with the final product and I was able to spend time going over other systems in their RV and how they functioned during the down time.  The customers where not new to RVing, but they were new to full timing and new to DRV.