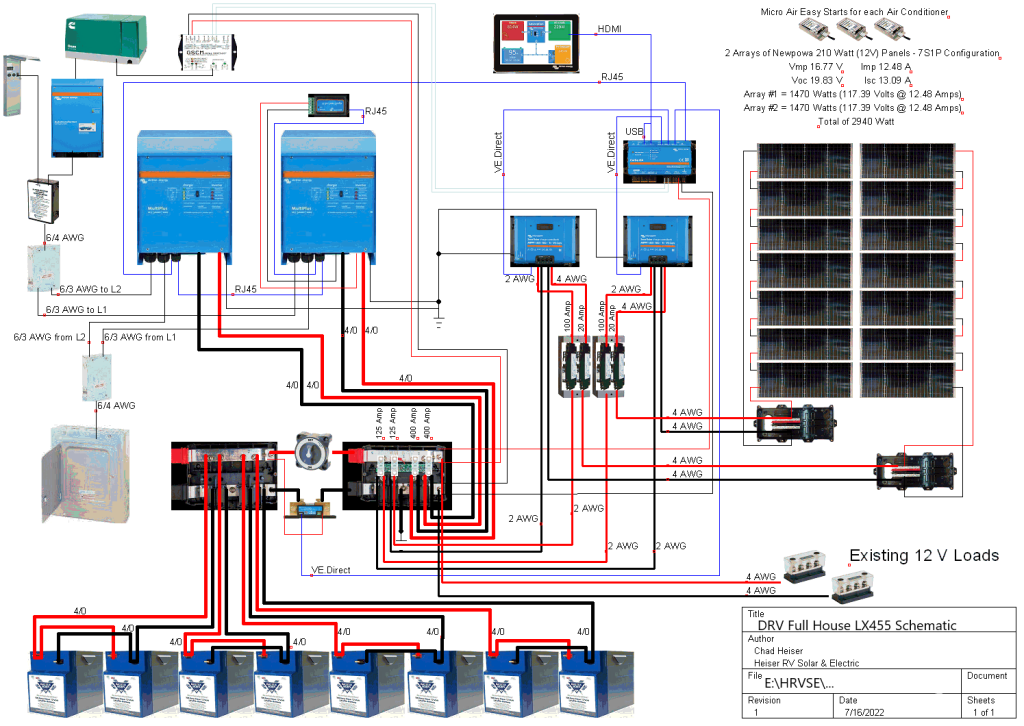 This installation was completed in August of 2022.  The owners of this rig were referred to me by Rolling Retreats, which is the RV dealer (in Elk City, OK) where they purchased the RV.  The owner contacted me and we spoke about what he wanted and what I could do for him.  He wanted a robust system that could handle running an air conditioner or two and keep them going like they were plugged in, whether they were or not.  I put together a system proposal consisting of dual 3KVA inverters, 2940 watts of solar and 800 amp hours of lithium batteries (among other things).  Based on our back and forth conversations, he accepted the proposal and we set an installation date.

This RV was brand new and was factory ordered by the customers.  They are full time RV’ers and this unit is their only home.  They picked the RV up in Oklahoma in June and made it out to my place for the installation in August.  Unfortunately, by the time they made it to me they discovered a major flaw with the RV.  Somehow when the factory applied the rubber roof membrane, they failed to apply any glue under the membrane.  As the owners were traveling, the roof membrane began to bubble and eventually tore in several places just prior to arriving at my location.  They already planned to return to Rolling Retreats in October to have an RV Flex Armor spray on roof applied to their rig, but they obviously needed their exiting roof membrane to last until that time to prevent any potential water damage or leakage.  I assessed the roof during my installation process and did the best I could to temporarily repair it prior to installing the solar panels.  I applied glue to the substructure at all the locations where the membrane had torn away.  I then laid out the membrane as best I could and applied Eternabond tape over all the tears and seems.  Hopefully between my repairs and the additional 56 hard solar panel mounts screwed to the roof, the membrane will survive without any further issues until they can have it removed and replaced with the Flex Armor roof.  At least the manufacturer is taking care of the customer and applying the cost of repairing/replacing the rubber membrane roof toward the cost of the new Flex Armor roof.

Other than the roof issue, the installation went pretty smoothly.  The basement in this particular floor plan is pretty small and I had to take up a bit of floor space for the new battery bank.  I tried to minimize the loss of storage capacity as best I could.  I also built a box around the new battery bank that can be used as a shelf for storage space.  This RV had an existing Magnum CSW-1012 pure sine wave inverter from the factory to power the residential refrigerator.  I left this inverter in place and functioning.  This allows the owners to turn off the new, larger Multiplus inverters during travel or when trying to conserve power and let small inverter keep the refrigerator running.  I have a similar set up in my personal RV and it is a nice option to have.