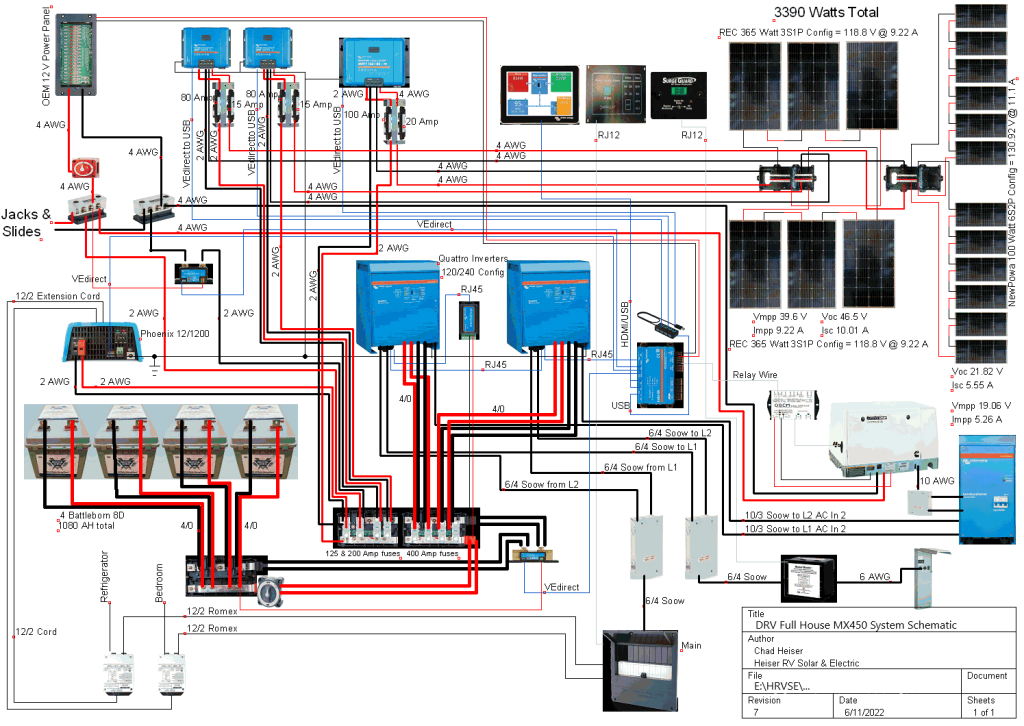 This installation was completed in June of 2022.  This is my personal RV and it was purchased out of necessity due to an accident with my previous RV (DRV Mobile Suite 40KSSB4).  I brought this trailer home on a Monday evening and was scheduled to leave on a month long trip the following Saturday morning.  This gave me four days to complete this installation.  It turned into four very long days, but I was able to get it installed and functioning for our trip.  I still have some wiring to clean up, battery covers to make and a few other cleanup items to do, but the system is functioning well as it is.  The majority of the parts for this system came from our previous trailer.  The exception to this was the solar components.  I ended up selling the solar components from the old system to a friend of mine and put all new solar components on this rig.  I plan to add an autotransformer in line with the generator output to turn the two legs of 120 volt the generator produces into 120/240 volt power.  I will then wire the two generator legs directly to the secondary inputs on the Quattro inverters.  This will allow me to monitor generator and shore power inputs individually via the VRM portal.  I will add a second 50 amp cord input at the front of the RV and wire it to the OEM transfer switch where the generator would have been connected.  I will update this installation description when I have completed these tasks.

This is a very large system and is capable of powering everything in the rig with no issues.  The dual 5KVA Quattro inverters provide approximately 2000 watts less than a 50 amp power pedestal.  This means I can literally turn everything in the trailer on at once without shore power and run it all.  Of course I can’t do this for very long, but it is nice to not have to worry about managing which devices I turn on at the same time.  With 3390 watts of solar and three solar controllers capable of producing up to 225 amps of charging power, I can easily run a single air conditioner all day (during daylight hours) without depleting the battery bank.  I can in fact charge the battery bank while that air conditioner is running.  The solar won’t quite keep up with two air conditioners, but it is close enough that I could run two air conditioners for several hours without worrying about running out of power for the day.

Some people ask why I built such a large system for my rig.  I could certainly have gotten by with a smaller system and been perfectly happy.  I have in fact had several smaller systems than this and boondocked very comfortably with those systems.  My main reason for building this large system and basing it around a 12 volt battery bank was to show that is possible to do.  Many people who don’t really understand electricity will claim a system this size needs to be based around a higher voltage battery bank (like a 48 volt bank).  This simply is not true and my system (as well as a few others out there) are living proof of this.  As long as the system is designed and built to handle the high amperage draws mine is capable of, there is no problem with using a 12 volt battery bank.  Pretty much every RV in the US comes with an OEM 12 volt battery bank and there is no need to replace that bank or convert back to that voltage from a higher voltage system just because you want a large, high power system in your rig.

Update – as of August 2022, I have finished the few remaining tasks I had for this installation.  I added the Autotransformer to the generator output.  The Autotransformer takes the two legs of 120 volt in phase power and transforms it to two legs of opposing phase power.  This means the generator now supplies 120/240 volt power.  Now when I run the generator, power is passed through both inverters, instead of just one.  I also wired the generator output directly to the AC Input 2 connections on each inverter.  This allows me to track generator power separately from shore power through VRM.  Because the Quattros have two separate AC inputs with an internal transfer switch, they can differentiate which input is being used and report that information to VRM.  I have the AC Input 1 set to Shore Power and the AC Input 2 set to Generator.  VRM shows both input sources and individually tracks when each of them are being used.  This is a very nice feature of the Quattros and VRM.  I also cleaned up some of my wire runs and made things look a little neater.  The initial installation was done under a time crunch and I didn’t have time to make everything look pretty.  I am much happier with the looks of the installation now.