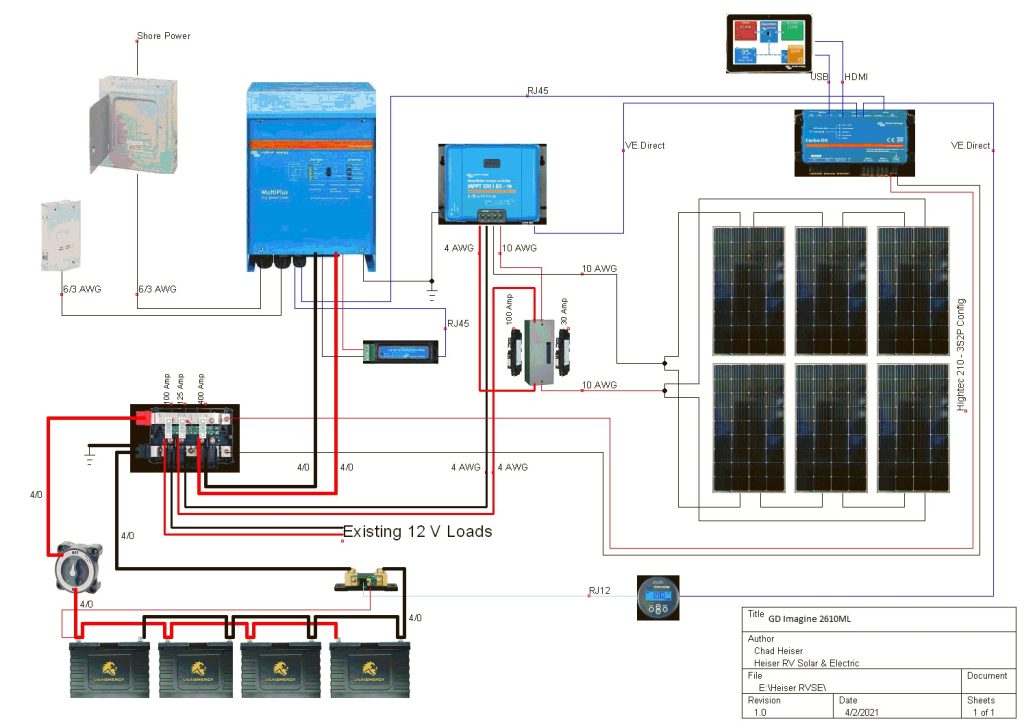 This installation was completed in April and May of 2021.  The owners of this travel trailer contacted me after they saw a post on the Grand Design Forum about another installation I had completed.  We discussed what they wanted and I presented a plan, to which they agreed.  They originally wanted Battle Born batteries, but ended up taking advantage of the COSTCO sale on Lion Energy batteries instead to save a little money.  The installation took place in two phases because the solar panels they selected ended up being on backorder for about a month.  I installed everything but the solar panels initially and then added the panels once they arrived.  I added plywood behind the paneling in the pass through compartment to give some structure to mount all the equipment.  The batteries were mounted in the pass through with the rest of the equipment rather than in the OEM tongue mount location to give better climate control for their use.  The trailer had existing 10 AWG solar wire run from the roof to the pass through storage area.  The solar panels were installed in 3S2P configuration to allow for the existing wiring.  The travel trailer is set to run all outlets, the microwave and the single air conditioner from the inverter.  I added a Micro Air Easy Start to allow the inverter to handle the initial surge of starting the air conditioner.  The solar is not quite enough to make up for the energy draw of the air conditioner, but it is close.  I discovered one outlet in the trailer was tied into the gas absorption refrigerator outlet.  This outlet needed to be rewired and moved to another circuit to allow the inverter to power it with all the others.  I initially had some issues programming the inverter in this installation.  This was mainly caused by my laptop which  decided to freak out when I went to do the programming.  I eventually got everything to work, but have since replaced the laptop so I don’t have anymore issues like that.