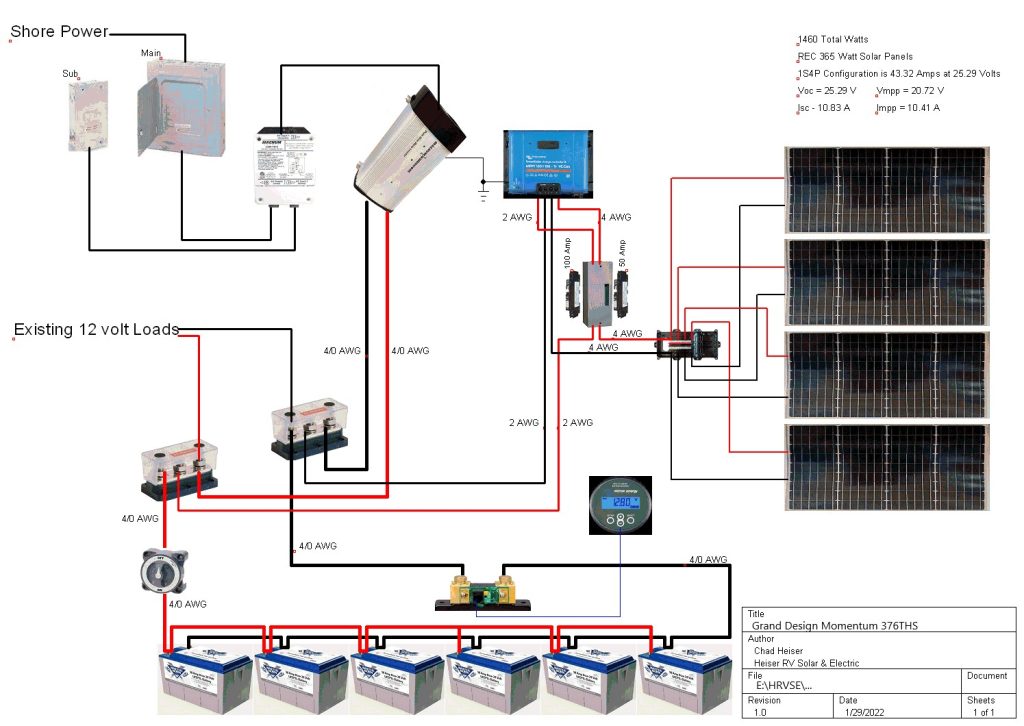 This installation was completed in February of 2022.  This 5th Wheel came new from the factory with a Solar option that included a single 300 watt solar panel, a Jaboni 30 amp MPPT charge controller, a Magnum Energy 2000 watt pure sine wave inverter and two 6 volt lead acid batteries.  The inverter was wired to a subpanel and powered four circuits in the 5th wheel.  The subpanel circuits powered the standard receptacles, the GFCI receptacles, the refrigerator and the free standing oven.  The owners of this 5th wheel were satisfied with the 2000 watt inverter and what it powered, but wanted more DC power storage and generation.  (They may eventually upgrade to a larger inverter.)  They wanted to be able to use their RV for longer periods while boondocking without having to run the on board generator to recharge the batteries.  They purchased two Battle Born heated lithium batteries to replace the OEM 6 volt lead acid batteries and installed them, along with a lithium compatible converter.  They also had a BMV-712 battery monitor, but had not installed that yet.

I met the owners of this rig in Quartzsite, AZ.  They were using their new lithium batteries for their first extended boondocking stay.  They approached me about adding to their existing system to allow them to be more comfortable off grid in their RV.  We discussed what they wanted to do and I came up with a plan to accomplish that.  Ultimately they agreed to add four additional heated Battle Born batteries and upgrade the solar array from a single 300 watt panel to four 365 watt panels.  This necessitated replacing the Jaboni solar controller with a Victron MPPT 150/100 solar controller.  After our discussions, we set up an installation appointment for mid February.

When the owners arrived with their rig, I began the installation process.  First I added the four additional Battle Born batteries and the BMV-712.  This process included replacing all the OEM battery cabling with custom built 4/0 cables.  I also installed the heated battery kit to allow all the heating elements in the batteries to be activated from a single switch.

When the batteries were completed, I began the removal of the existing solar panel and controller and added the new solar array and upgraded controller.  The batteries and solar controller were all mounted in the front compartment next to the generator.  This is also where the OEM Magnum inverter was located.  I did add some bus bars in this compartment to facilitate battery connections as well.  In addition to the MPPT 150/100 solar controller, I added a Midnite Solar Baby Box with a 100 amp MNEPV solar breaker for the connection to the battery and a 50 amp MNEPV solar breaker for the connection to the solar array.  I ran new wire from the roof to the solar controller.  This wire was 4 AWG welding cable and it was run through the OEM solar pass through to the roof from the basement compartment.  I used an AM Solar combiner box on the roof to connect the four new 365 watt solar panels in parallel.