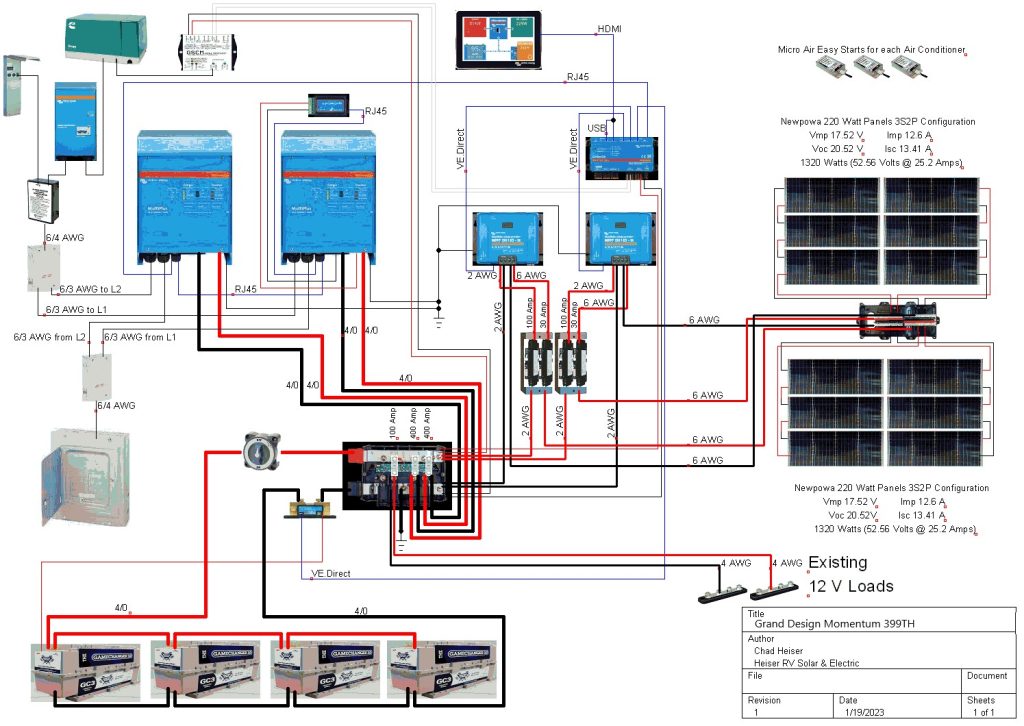 This installation was completed in January of 2023.   The owner of this rig contacted me regarding a possible system for his new (to him) toy hauler.  We discussed what the wanted to accomplish with the system and I put together a schematic and estimate.  The owner was communicating with another installer as well, but ultimately chose to use me for the installation. The owner and his significant other are new RVers and are jumping in with both feet.  The purchased this toy hauler and a Ford dually to tow it and they are going full time in the RV.  The owner purchased the RV and used and immediately put it into storage while they prepared for full time life by downsizing all their things.  When they towed the rig to my place for the installation, it was the first time he had ever towed the rig.  Unfortunately for him, it was during a rain storm and their GPS led them on some less than ideal roads to get to my place.  They were a bit frazzled when they arrived, but they made it without any major issues.  Once they arrived, I got them set up in a site and they lived in their rig while I did the installation.

This RV was used, but appeared to be in pretty good shape.  The access for the installation was very good.  This particular floor plan is a bit unique in that the basement is not a passthrough style basement.  It is only accessed from the passenger side of the trailer.  The water connection bay is on the driver side of the trailer and takes up the space where an access door normally would be.   I spent some time coming up with the best layout for all the equipment.  I ended up building a shelf above the generator in the generator compartment to mount the four Battle Born Game Changer batteries.  There was quite a bit of dead space there and the batteries fit well.  I removed the OEM batteries from the floor of this compartment and replaced them with bus bars leading back to the new battery bank.  This allowed this space to be recovered for additional storage.  I mounted the inverters and solar controllers to the front wall of the basement.  Some of the equipment was in the dead space between the back of the wet bay and the basement divider wall.  Some of it did have to come into the basement storage area, but the space gained in the generator compartment for storage, more than made up for the limited space lost in the basement.  The only real snag that popped up in the installation was trying to run wire from the roof to the basement for the solar panels.  Grand Design installs a wire chase for this purpose and even includes a pull wire to make running new wire “easy”.  It didn’t quite work out easy for me though.  The pull wire must have been wrapped around something inside the chase because it would only “pull” a short distance and then it would stop and wouldn’t go any further.  I ended up having to remove some trim boards in the bathroom of the trailer to get access to the inside of the bathroom wall where the chase was located to get my wires to feed down to the basement.  This ended up taking a lot longer than it should have if the pull wire in the chase hadn’t been snagged on something.  Other than this, everything went very smoothly.  I was able to complete the installation in five days and the owners were very happy with the final result.

In addition to the installation, I spent some time with the owners talking generally about RVing and showing them how some of the systems in their rig worked.  They were very appreciative of this added service.  I also recently became a dealer for Ruuvi Tag temperature sensors and Mopeka Pro Check tank sensors.  Both of these sensor types are wireless Bluetooth sensors that communicate directly with the Cerbo GX.  The customers decided to add several temperature and tank sensors to their installation after talking with me about how their rigs systems work and how best to utilize the sensors.