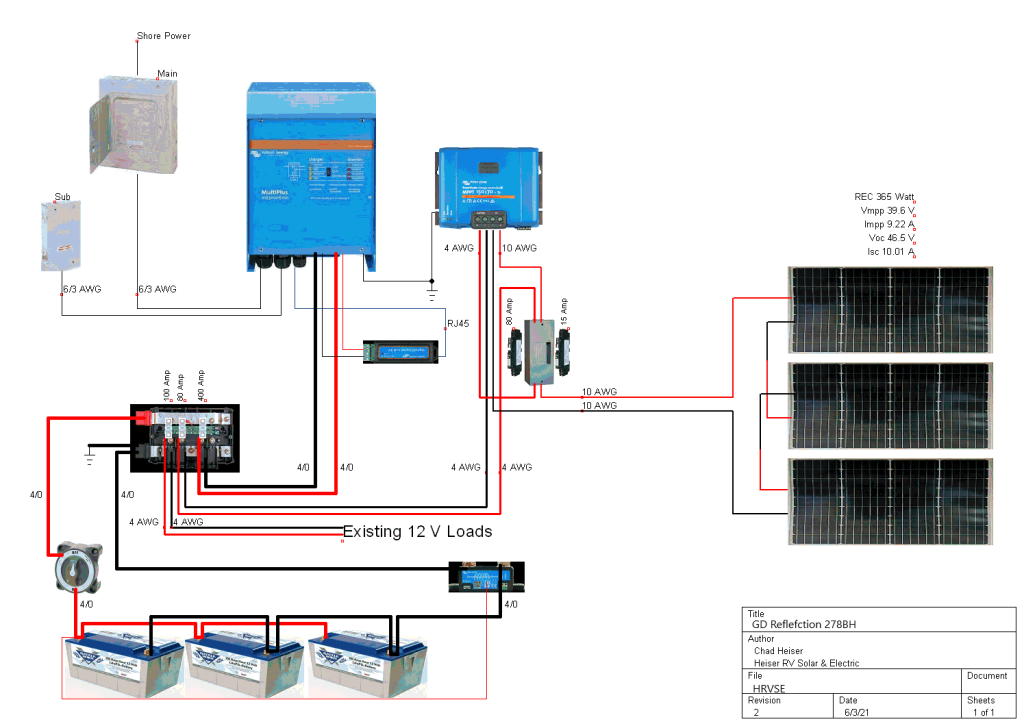 This installation was completed in August of 2021.  The owner of this 5th wheel contacted me when he found out I had started my business.  We discussed what he wanted and I presented a plan, to which he agreed.  We set an installation appointment and got all the parts ordered.  The installation took place over a three day weekend.  I had seen the 5th wheel once before the owner showed up for the installation.  I took some time at the beginning of the installation to plan mounting locations for all the equipment.  After opening up the back wall of the basement storage area, I found a lot of unused space.  There was also a lot of space under the stairs leading to the bedroom.  The stairs had several vertical supports which I removed and replaced with headers and supports on either side.  I was able to fit the batteries under the stairs, with room to add a 4th if desired.  The remainder of the equipment all went in the dead space behind the rear wall in the basement.  The OEM batteries were located in the front generator compartment.  These were removed and the space they took up was gained as additional storage space.  This trailer already had wire run to the roof for the solar connections, so I did not have to find a way to run that.  Once I had all the components in place and wired up, I discovered Grand Design used an unusual style of breakers in the main power panel.  They had different mounting connections than standard breakers.  As a result, I was not able to use any of the existing breakers in the new sub-panel.  I was also not able to use the 50 amp single pole breaker I had in the main panel to feed the new inverter.  I ended up having to order the correct 50 amp breaker to feed the inverter because it was not available anywhere locally.  This trailer had an outdoor kitchen with a small residential refrigerator.  The small refrigerator was wired to the same circuit as the main RV refrigerator.  I was able to isolate the small refrigerator from that circuit and wire it to a nearby circuit so it could be powered by the inverter.  This customer wanted to be able to run an air conditioner from the inverter for short periods of time if necessary.  I installed Micro-Air easy starts on both air conditioners and wired the main living room AC to the sub panel so it could run on inverter power.  The customer also had a Hughes Autoformer and a Hughes Watchdog portable EMS.  He wanted a way to use these components without having to manually hook them up each time.  It just so happened his RV had some dead space under a cabinet where the RV power cord exited the RV.  I was able to sever the power cord at that location and add male and female cord ends to it in the dead space.  I was then able to mount the Autoformer and EMS in the location and plug everything in like it would have been at the pedestal.  This allowed the customer to simply plug in the power cord as usual and the power then fed through the Autoformer and the EMS before going to the rest of the trailer.  If either of these devices ever fail or if the customer decides he does not want to use them for some reason, they can simply be unplugged and removed from the system.