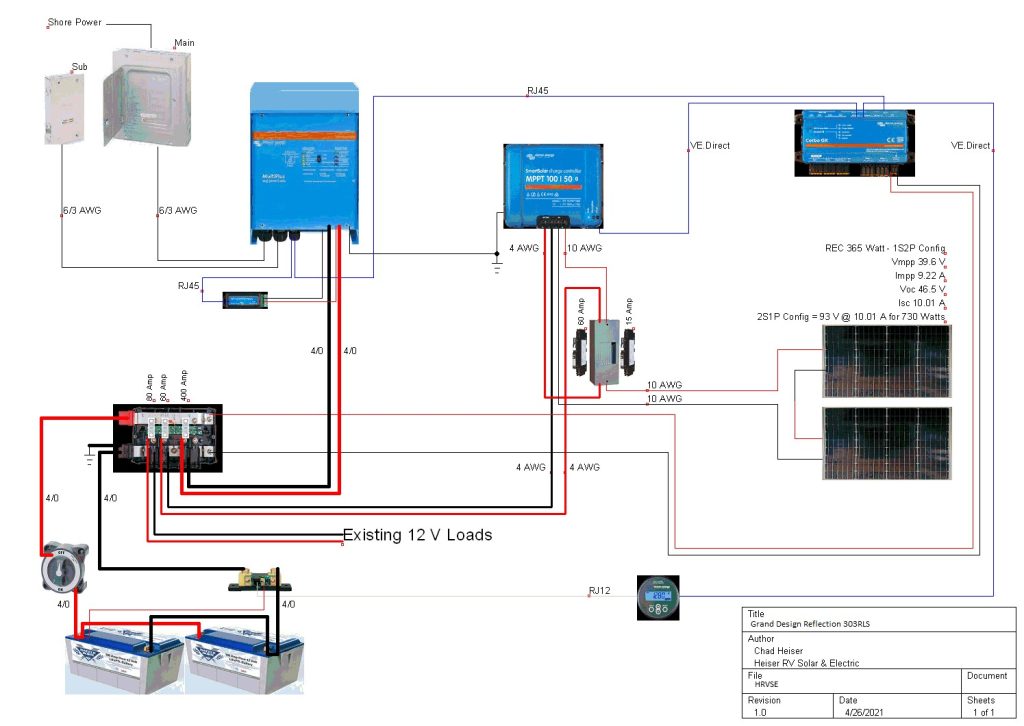 This installation was completed in June of 2021.  The owners of this 5th wheel contacted me after they saw a post on the Grand Design Forum about another installation I had completed.  We discussed what they wanted and I presented a plan, to which they agreed.  We set an installation appointment and got all the parts ordered.  The installation took place over a three day weekend.  I had never seen the 5th wheel until the owner showed up for the installation.  I took some time at the beginning of the installation to plan mounting locations for all the equipment.  I decided I could fit everything behind the rear wall of the basement storage bay.  With a little bit of trial and error, I was able to make everything fit.  There was a mess of OEM wiring hidden in the space.  I would have liked to have spent some time on cleaning up that mess before I installed all the new equipment, but due to time constraints I wasn’t able to do that.  Luckily everything fit even with the existing mess of wires and it remains hidden behind walls so it isn’t an eye sore.  The owner decided to start with two lithium batteries, but we discussed the possibility of adding additional batteries later and came up with a plan for mounting those batteries if/when the need arose.  All the equipment went in without any issues.  The customer gained additional storage space in the front (generator) compartment because the OEM batteries were removed from that location.  The 5th wheel had 10 AWG wire pre run from the roof, which was used to connect the REC solar panels to the system.  The panels were run in series to utilize the smaller gauge wire.  Once everything was hooked up and the desired circuits were moved from the main panel to the sub panel, we discovered some issues with the factory 120 volt wiring.  Grand Design combined the 120 volt receptacle for the RV refrigerator  with all the other 120 volt receptacles in the kitchen slide.  This made it impossible to isolate the RV refrigerator to the main power panel without losing inverter functionality to the remaining receptacles on that circuit.  I could have completely rewired all the receptacles in the kitchen slide, but time constraints wouldn’t allow for that.  The customer had asked about the possibility of running the 120 volt side of the RV refrigerator from the inverter while traveling before the installation started.  I don’t typically recommend this unless there is enough solar and battery infrastructure to support the potential draw.  After some real world testing we determined the installed solar would at least keep up with the draw.  It wasn’t going to support much charging while the refrigerator was running on 120 volt through the inverter though.  We discussed making sure the batteries were fully charged before travel to mitigate any potential issues with power usage while traveling.  We also found Grand Design combined two 120 volt receptacles at the rear of the trailer along either side the sofa on the microwave circuit.  This was not a problem, but was just odd as the microwave is typically isolated on its own circuit.