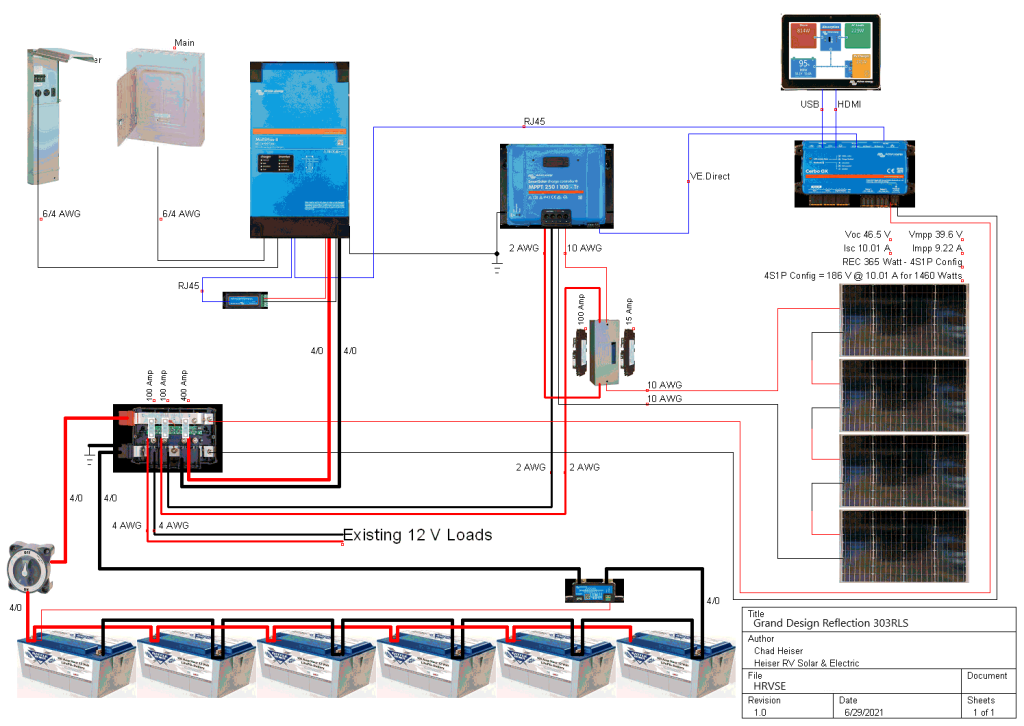 This installation was completed in September of 2021.  The owners of this 5th wheel contacted me after they saw a post on the Grand Design Forum about another installation I completed.  We discussed what they wanted and I presented a plan, to which they agreed.  They then got all the parts ordered.  There was a bit of a delay waiting on one particular part.  The customer ordered one of the brand new MultiPlus-II inverters.  It was on back order until late August, which held up the installation appointment for a while.  Once the inverter finally arrived, the customer brought the rig to me and I completed the installation.  This was the second installation I completed on this particular floor plan so I had a good idea how it would go.  This customer ordered the trailer with some different options than the last one I did though.  This customer also had six batteries instead of the two I put in the last installation.   Those facts and the physical size difference between the original MultiPlus and the MultiPlus-II, made me change a few things around this time.  All of the equipment was installed behind the rear wall of the basement storage area and under a cabinet in the main living area.  The cabinet backed up to the dead space behind the basement wall and the rear of the cabinet opened up into that space.  The customer did lose the bottom drawer in that cabinet as a result of the installation, but additional space in the generator compartment was gained because the OEM battery was removed as part of the installation.  I was able to fit all six batteries on the floor under the interior cabinet.  Actually three of them went on the floor and the other three were installed on a shelf I added over the water heater that was hidden under that cabinet.  The solar controller also ended up in this cabinet.  The inverter and Lynx distributor were installed behind the cabinet in the dead space between it and the basement wall.  The only equipment visible to the user without opening a door or removing a wall is the main battery cut off switch I added.  That switch was installed on the ceiling of the basement storage area and is easily accessible from the passenger side basement door opening.  This was my first chance to see and install the new MultiPlus-II.  It is much taller than the original MultiPlus and would not even stand up in the basement of this 5th wheel due to the height of the unit.  I was able to mount the MultiPlus-II on its side, just behind the basement wall.  It was installed in line before the main power panel and was able to power both legs of the 50 amp breaker panel.  Once I had it installed, I found the Cerbo GX and Touch 50 were not displaying any power information passing through line 2 on the inverter.  I learned this was a known issue with the new MultiPlus-II and will hopefully be rectified soon with a firmware update from Victron.  The 5th wheel had 10 AWG wire pre run from the roof, which was used to connect the REC solar panels to the system.  The panels were run in series to utilize the smaller gauge wire.  I also installed Micro-Air Easy Starts on both air conditioners as part of this installation.  These Easy Starts came from HutchMountain.com and they had Bluetooth built into them.  There is an app that pairs with the Easy Starts and shows information about how much power the AC is pulling and also the difference in the power it takes to start after the Easy Start is installed.  It also tracks the learning process of the AC after the Easy Start is installed, which makes that process easier.  I was not aware Micro Air offered a Bluetooth version of there Easy Start and I tried to find it on their web page, but couldn’t.  I’m not sure if this is something Hutch Mountain adds to the Easy Start or if it is exclusively built by Micro Air for Hutch Mountain.  I plan to contact Micro Air and find out though.   I included some screen shots of the app below for reference.  Once the Easy Starts were installed, the inverter was easily capable of running either air conditioner with no issues.  This is a very nice and robust system and is capable of powering the entire trailer with no issues.