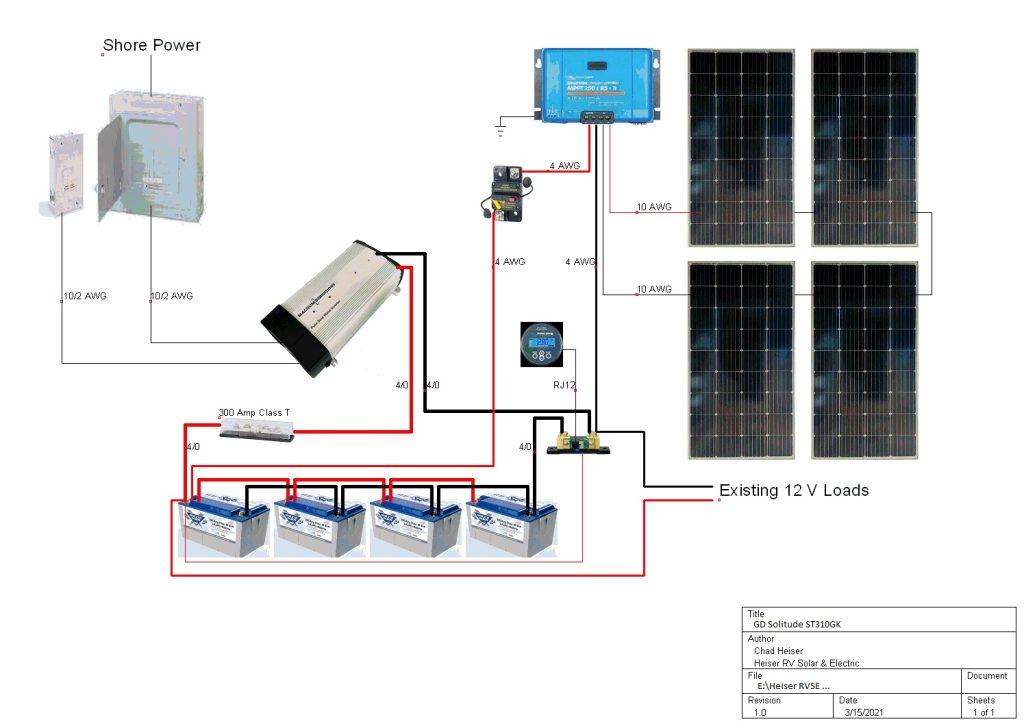 This installation was completed in March of 2021.  This 5th Wheel came new from the factory with a Solar option in February of 2021.  This option included a single 300 watt solar panel, a Jaboni 30 amp MPPT charge controller, a Magnum Energy 2000 watt pure sine wave inverter and two 12 volt lead acid batteries.  The inverter was wired to a subpanel and powered three circuits in the 5th wheel.  The subpanel circuits powered the standard receptacles, the GFCI receptacles and the refrigerator.  This option is typically installed with a residential refrigerator.  Unfortunately the refrigerator in this 5th wheel was an RV style gas absorption refrigerator, not a residential refrigerator.  This allowed the electric side of the gas absorption refrigerator to be powered by the inverter and defeated the ability of the RV refrigerator to automatically switch between gas and 120 volt power when the inverter was turned on.  After discussion with the owner, he wanted this changed.  I was able to rewire several circuits in the 5th wheel’s 120 volt system and moved the refrigerator circuit from the subpanel to the main panel.  I also moved the microwave from the main panel to the subpanel in place of the refrigerator circuit.  This allowed the microwave to now work from inverter power.  This process was complicated by the fact the factory wired all of the non GFCI receptacles in the kitchen and bedroom on the same circuit as the refrigerator.  All of these receptacles had to be isolated from the refrigerator circuit and rewired back to the subpanel.  It took a little creative thinking and wiring, but the job got done.  In addition to this, the Jaboni charge controller was removed and replaced by a Victron charge controller.  The owner of the 5th wheel bought the Victron charge controller from a reseller based on their recommendation for the described solar panels.  Unfortunately the reseller sized the charge controller for the three new panels added to the system only and did not account for the existing panel on the 5th wheel.  The solar controller is being replaced to one of proper size (Victron MPPT 250/85) based on the panels’ ratings and their wiring configuration.  All four panels were run in series because the existing factory solar wiring was only 10 awg and the series connections were needed to allow for the existing wiring.  The panels were all placed toward the rear of the 5th wheel because the owner wanted to minimize any weight added to the pin of the 5th wheel.