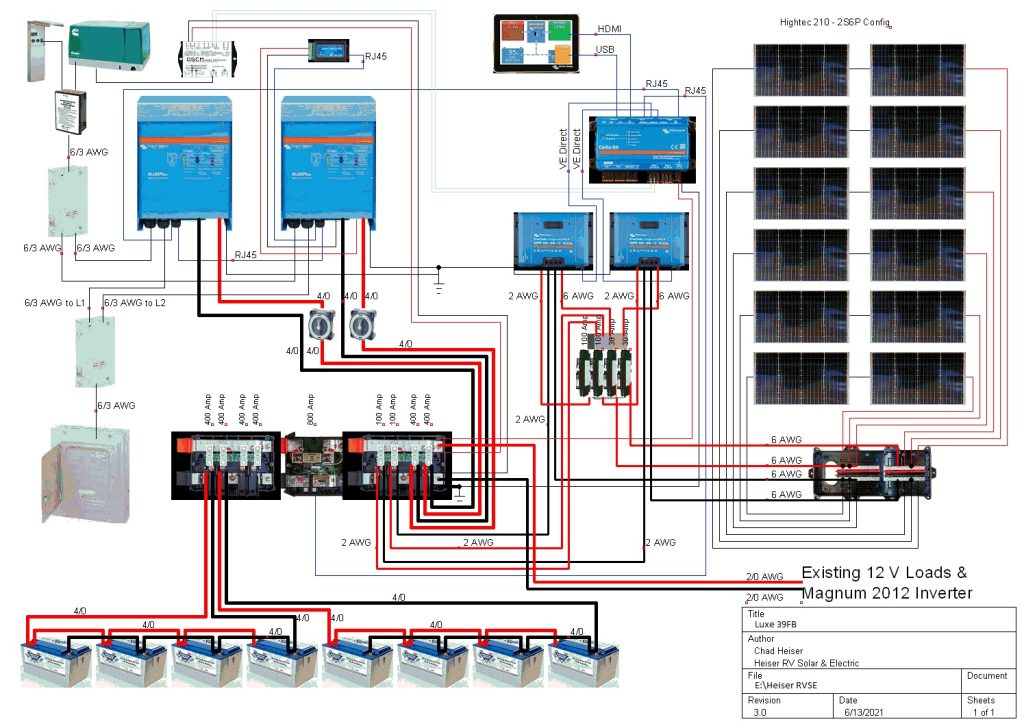 This installation was completed in July of 2021.  The owners of this 5th wheel wanted a system to allow for basic creature comforts while off grid.  After a lot of discussion and determining what the owner really wanted to accomplish, the system began to grow.  The system was designed to allow for the entire coach to be powered from battery/inverter/solar, including air conditioners.  We decided to fill the roof with as much solar as it would hold without building racking to span over existing roof obstructions and to still allow a walking path on the roof for maintenance and inspections.  Based on measurements, this meant 12 Hightech 210 watt panels for a total of 2520 watts.  The solar is divided into two arrays.  Both arrays are 2S3P and each feeds into a 150/100 MPPT.  I was able to use a single combiner box with two sets of bus bars to feed down from the roof.  The system is built around a battery bank of 8 Battle Born 100 AH lithium batteries.  I left room to easily add 4 more batteries if the owner decides he wants more storage capacity.  The dual inverters are set up to run L1 and L2 of the power panel to produce 240 volt power.  When plugged into 50 amp service, both L1 and L2 pass through the inverters to the main power panel.  When plugged into less than 50 amp power, power passes through on L1 (with power assist as needed) and the inverter on L2 inverts only.  The 5th wheel had an existing Magnum 2012 inverter to power the residential refrigerator when traveling.  This inverter was left in place and functions the same as it did before the installation.  It can still be used when traveling to keep the refrigerator running without having to keep the two 3000 watt Victron inverters turned on.  I was able to install all of the equipment in dead spaces behind existing walls in the basement storage area.  I did push one wall out approximately 6 inches to make room for future battery expansion.  The existing OEM batteries were removed from the front/generator compartment, so storage was gained in that area that more than made up for the small space lost in the basement.  The installation took approximately 5 days to complete.