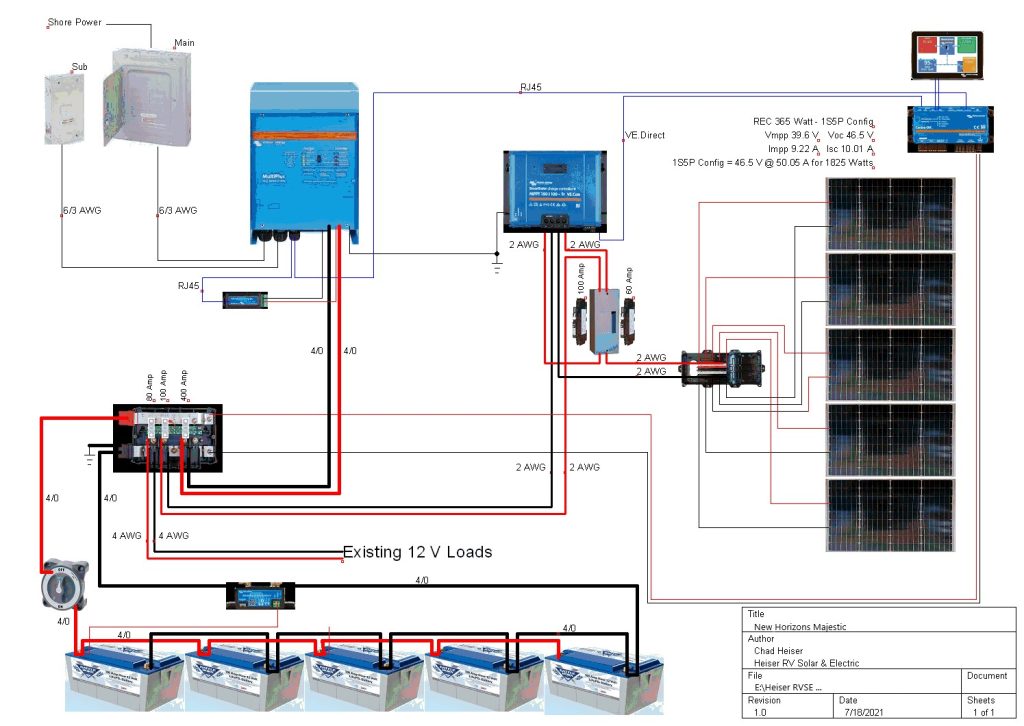 This installation was completed in June and October of 2021.  The owners of this 5th wheel were attendees of the 2021 West Coast Heavy Duty Truck Rally (which I host).  They purchased five Battle Born Batteries from me at the rally and I installed them there.  I also installed new battery cabling, a Victron SmartShunt, and a lithium compatible converter.  The converter was a temporary measure because the owners knew they wanted to add an inverter/charger and solar to the system, but this wasn’t feasible to do at the rally.  The lithium compatible converter allowed them to keep the Battle Born batteries properly charged and maintained until the additional work could be completed at a later time.  We communicated after the rally regarding the additional components they wanted.  I came up with a system design that met their needs.  I put together an estimate and parts list.  The parts were ordered and an installation date was set for October when the customers were going to be in my area.  Once they arrived, I began working.  This was my first full system installation on a New Horizon.  It was an older model New Horizon, but still a nice unit.  It had a main power panel and sub panel installed from the factory, so it was relatively easy to add an inverter to the system.  I did rewire some circuits in the two panels to better balance loads and to make sure the circuits the customers wanted to power with the inverter were in the sub panel.  This included the circuit for the living room AC.  The customers decided they wanted to be able to run the main AC from inverter/battery power.  This decision was made during the installation process.  They ordered a MicroAir Easy Start when they left and plan to have it installed by an RV tech when it arrives at their next destination.  I found an open chase behind the kitchen pantry that made running wire to the roof for the solar panels a fairly easy process.  This chase was for some existing tank vent pipes and was wide open.  I was able to fit six large 365 watt panels on the roof of the RV.  I wasn’t 100% sure I would be able to make all six panels fit because of the bathroom sky light.  It interfered with the location I wanted to mount one panel.  I was able to span one corner of the sky light with this panel and make it fit though.  There was enough clearance with the panel mounts to make this work.  I also removed a portable satellite dome antenna that was mounted on the roof of the RV to make room for the solar panels.  The customers did not use this dome.  It was mounted on the roof by a previous owner.  If the customers decide to go with a satellite TV plan in the future, they can use this dome as a portable unit in the future if needed.  The inverter and Lynx distributor were installed on a shelf next to and above the battery bank. This shelf was where the converter was located in the RV already.  The customer lost a small amount of storage space on that shelf, but it was difficult space to access for storage, so it was not a big loss.  I also added a floor to the battery bay as part of this installation.  The OEM battery bay was wire mesh for lead acid battery venting.  Now that lithium batteries were installed this was no longer needed and the new floor will also help insulate the batteries from the elements better.  The Touch 50 display went in the existing control center cabinet after I moved the Sea Level tank gauge to make room for it.  I did have to cut an access panel in the wall at the bottom of this cabinet to make running the wires for the Touch 50 possible.  The Cerbo GX was mounted in the dead space behind this new access panel.  The install went fairly smoothly and the system performed well on testing.  Overall, the customers were very happy with it.  This is a very nice and robust system and is capable of powering everything in the trailer the customers want with no issues.  I did learn New Horizon slides pull a lot more amperage when extending than typical 5th wheels.  New Horizon installs a 120 amp resettable breaker in line for the slides.  I missed this in the initial system design and specified a fuse of insufficient size for the OEM 12 volt connections coming from the Lynx distributor.  Luckily we ordered spare fuses for all the connections in the Lynx (my standard practice), so we had larger fuses available to use until the proper fuse could be ordered.  I used 4/0 cable to make the OEM 12 volt connections from the Lynx so a larger fuse was no issue in that circuit.