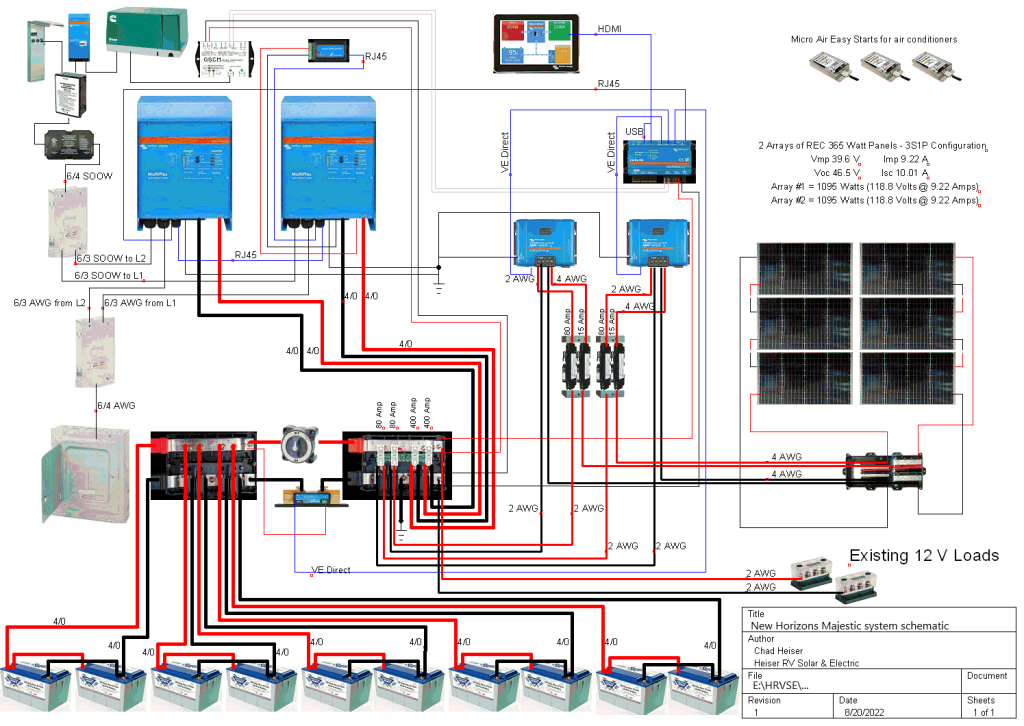 This installation was completed in August of 2022.  The owners of this 5th wheel are full time RVers.  They wanted to add some additional functionality to their already well appointed, custom built 5th wheel.  The customers were not the original owners of this 5th wheel, so they were tweaking it to make it fit their lifestyle better.  The RV had an existing Magnum Energy 2012 inverter charger with BMK battery monitor, ME-ARC remote display and AGS module.  The inverter was wired to power a sub panel in the RV.  There was no solar in the OEM system.

I was recommended to the owners by other customers of mine and they contacted me.  We discussed what it was they wanted to accomplish with their new system and how their current system was not providing what they needed.  They wanted to be able to live in their rig (basically) like they were plugged in, whether they were plugged in or not.  Their rig had three rooftop air conditioners, but they eventually planned to upgrade to a mini split system (that may or may not be a 240 volt system).  Based on our discussions, we landed on a dual inverter system with a bit over 2000 watts of solar and a large lithium battery bank.

When the customers arrived at my facility, they set up to spend the week with me.  I had not seen their rig in person before they showed up, although they had provided me pictures. The 5th wheel had a very large basement area.  It was so large in fact, I could sit upright on a footstool and still had headroom to move around.  I began looking for the best locations to install all the system components.  I found a large cavity behind the basement that was basically wide open, other than some piping and wiring.  This area was where the furnace and water heater would normally have been installed.  Fortunately this rig had a diesel fired Aquahot system that handled those tasks and the Aquahot was installed in the basement area, leaving this area available for the new components.  I removed a couple of small walls that were to a side storage compartment to open the area up even more.  This side storage area had a baggage door that accessed it, allowing for easy access to the new system components once they were installed.  I was able to put all of the components (batteries, inverters, solar controllers, shunt and lynx boxes) in this area.  The side storage compartment was lost as a result, but the OEM battery box was gained as a replacement storage area and it was a larger space.  The customers also gained some additional storage space where the original Magnum inverter had been installed.  Overall, the customers were very happy with the installation and the fact they gained some storage space.

The batteries were installed in five parallel pairs.  Each pair of batteries was wired to the Lynx Power In individually with equidistant wire lengths.  This will allow each battery pair to be used equally and to evenly spread the loads across all batteries.  The system was programmed to run in split phase 120/240 volt output.  This will allow them to run a 240 volt mini split system in the future with no issues.  The system included a Cerbo GX communication device with a seven inch touch screen.  It also included an Atkinson Electronics GSCM-mini generator control module.  This module allows the simple, normally open/normally closed, Cerbo GX relay to properly start and stop an Onan Generator.  The customer’s rig had an onboard 8k Onan diesel generator to control.  Unfortunately, the generator was only a 120 volt generator.  In order to maximize the generator output across both inverters, I installed a Victron 100 amp auto transformer.  This allowed me to take the two legs of in phase generator output and transform them to two legs of opposing phase (120/240 volt) output.  This way the generator would pass power through both inverters when it was running.