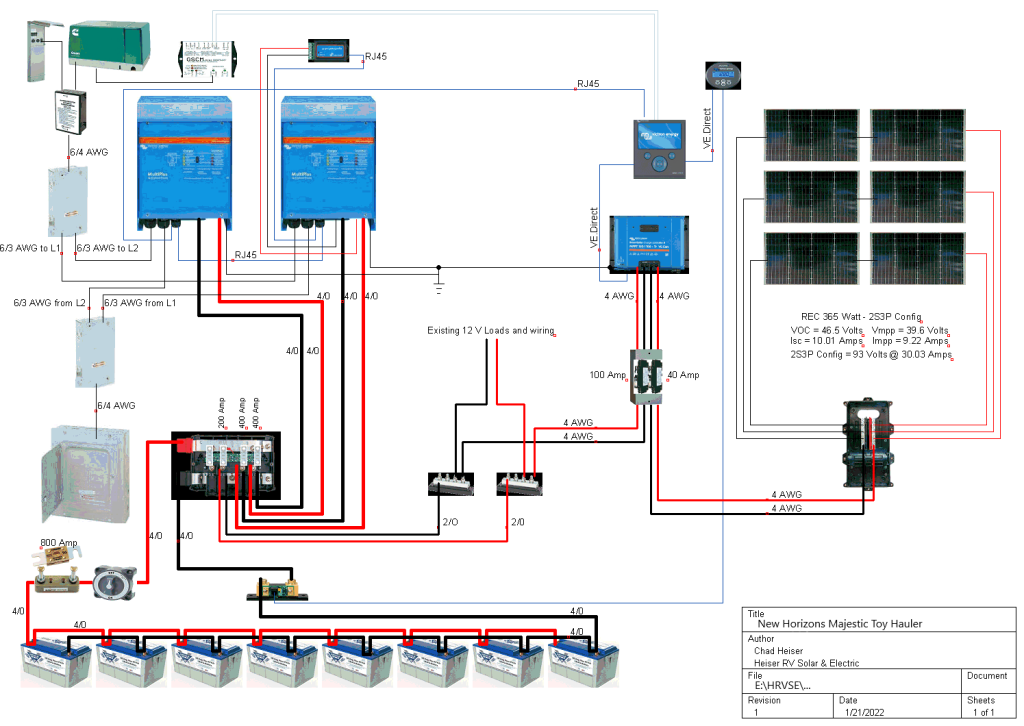 This installation was completed in January and May 2022.   This toy hauler came with a Victron System as OEM equipment from New Horizons.  This was one of a handful of Victron systems New Horizons installed.  The OEM system included four Battle Born 100 amp hour batteries, a single Multiplus 3KVA inverter, a BMV712, An MPPT 150/100 connected to two solar panels, and a CCGX.  The system also had a Magnum Energy automatic generator start module installed.

The owners of this RV contacted me because their system was not performing properly and they wanted someone to look at it to determine why.  I met up with the owners in Quartzsite, Arizona in January and went over their entire system.  I found the programming for the Victron components was not set up properly.  I was able to correct all the programming issues for the customer.  I also spent some time with the customer to teach them how to use their system and how to use the Victron Connect app to communicate with their system.  I also added a USB WiFi adapter to their CCGX and set them up with VRM access to their system and taught them how to use that as well.

The customer was also having issues with the Magnum automatic generator start module.  The module was not properly starting the generator when it was required.  I determined the Magnum AGS was only triggering on battery voltage due to its standalone installation.  Because lithium batteries maintain a fairly constant voltage even when the battery state of charge is low, using voltage alone as an AGS trigger is not advised.  I removed the Magnum AGS module and installed an Atkinson Electronics GSCM-mini generator interface.  This interface allowed me to set up the generator start/stop functionality built into the CCGX and use it to start and stop the generator when required with its integral remote control relay.  This allowed for a number of additional start triggers for the AGS, including battery state of charge, battery load, AC load and others; rather than just relying on battery voltage.

The customers were very happy with the work I did in Quartzsite and requested I put together a proposal to expand their system to a dual inverter system to allow them to run their 240 volt mini split air conditioner from inverter power.  As part of this upgrade, they also wanted to add more solar and battery capacity.  I put together a proposal for them based on their request and they accepted it. We set an installation date in May when the customers were going to be traveling through my local area where I have my shop.

When the customers arrived in May, the work began.  I added five additional Battle Born 100 amp hour batteries, a second inverter, and a second solar controller (not depicted in the above system schematic).  The original plan was to add four batteries, but there was room for a fifth so the customer requested I add it as well.  I also replaced the existing BMV 712 with a 1000 amp SmartShunt to handle the dual inverter loads.  Finally, I replaced their existing two solar panels with six REC 365 watt solar panels.  The solar panels were divided into two separate arrays.  One array of four panels was connected to the existing MPPT 150/100 solar controller and the second array consisting of the remaining two panels was connected to a new MPPT 100/50 solar controller (not depicted in the above system schematic because this design change was made after the schematic was drawn).

The owners were extremely happy with the final system.  They are full time RV’ers and continue to work from the road.  They prefer to work from remote boondocking locations rather than RV parks and their new system allows them to do this.  They can run the mini split air conditioner all day long with no issues with this system and still power their other needs such as their residential refrigerator and computers with no issues.