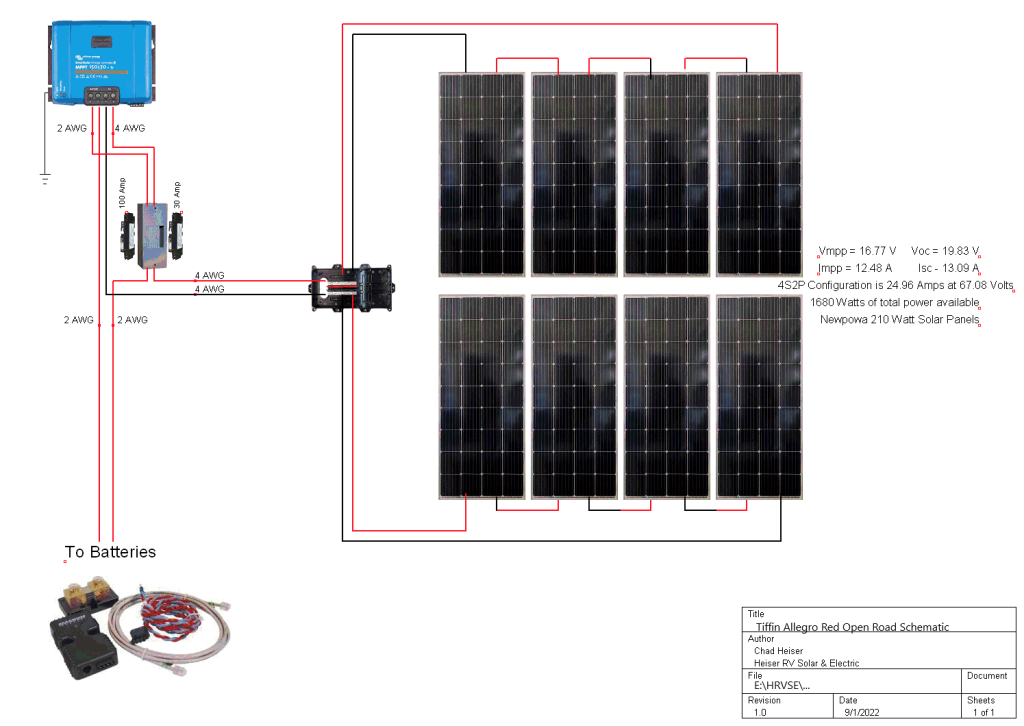 This installation was completed in November of 2022.  I spoke with the owner of this rig about a potential installation while on a camping trip in August.  The motorhome had an existing Magnum 2012 modified sine wave inverter with an ME-RC50 remote panel and Magnum AGS installed by the manufacturer.  The owner had recently upgraded the batteries to two Ampertime 200 amp hour batteries and was planning to add two additional batteries.  The owner wasn’t ready to upgrade the inverter yet, but he may do so in the future.  The owner wanted to add solar to the system, but wasn’t comfortable doing that himself.  We talked about his needs and I later put together a proposal for a solar installation.  The OEM installation did not include a battery monitor with the other Magnum components.  Part of my proposal was to add a Magnum BMK battery monitor to integrate with the existing remote display and inverter.  The owner accepted the proposal and we set an installation date.

When the owner arrived for the installation, he had added the two additional Ampertime 200 amp hour batteries to the system.  I spent a day and a half installing the solar components and battery monitor.  It was a bit of a chore to run the solar wire from the roof to the lower storage compartments.  I had to do some disassembly of some bathroom cabinets to get access to a wire chase alongside existing vent pipes to the roof.  The extra work was worth it though as once the chase was opened up, it was easy to run the wire.  The owner was very happy with the final product.  The panels were installed on a day with pretty much full cloud cover (there was even a chance of rain).  Once the solar controller was turned on, the panels were producing over 500 watts in the very poor conditions.  When the owner was preparing to leave, he told me he stored his RV indoors and he asked the best way to shut off his DC system to prevent parasitic battery draws when no solar was available.  I explained a main battery shutoff switch was the best answer.  He asked if I had any available he could add to his system.  I provided him with a Blue Sea 3000 HD series switch and a premade length of 4/0 battery cable so he could add the switch at his convenience.