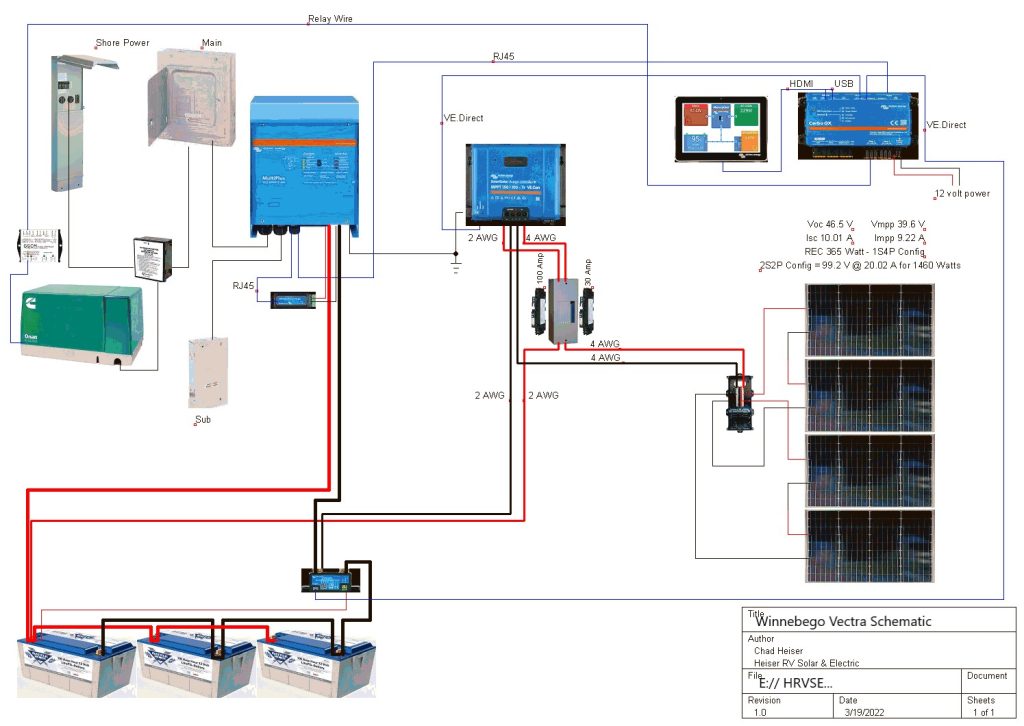 This installation was completed in April of 2022.  The owner of this motorhome wanted to be able to travel more and boondock without having to run the onboard generator regularly.  The motorhome had a factory installed inverter that had failed.  The OEM installation did not include a battery monitor.

The owner was interested in upgrading his system to better, more capable components, including replacing the failed inverter and adding lithium batteries and solar.  He went with Victron components for the new equipment and wanted Battle Born lithium batteries.  The battery compartment on this RV could only fit three batteries.  The existing three lead acid batteries were replaced with three Battle Born 100 amp hour batteries. The failed 2K inverter was replaced with a Victron Multiplus 3KVA inverter.  A Victron SmartShunt was added to handle the battery monitoring duties  and a Victron MPPT 150/100 SmartSolar controller was paired with 1460 watts of REC solar panels.  In addition, the customer opted for a Cerbo GX communication device with a Touch 50 five inch display.  The customer also wanted generator integration for the system, so an Atkinson Electronics GSCM mini was added to control the generator from the Cerbo GX’s simple Normally Open/Normally Closed programmable relay.

The installation went relatively smoothly, with only one issue.  As is typical with most motorhomes the wire runs were a bit difficult, but I was able to get everything in place with a bit of work.  The only real issue was an accidental puncture to the black tank in the RV.  While trying to follow an existing OEM wire run with some new wires, I learned (a bit too late) that the OEM run was directly under the black tank.  The wires penetrated some metal framing and then immediately laid over at a ninety degree angle and the tank laid on top of the wires.  When I tried to open up the penetration to add some new wires, I accidentally punctured a small hole in the tank.  Luckily I was able to patch the tank without too much problem.  I explained to the customer what happened and he was satisfied with the fix.  The customer was very happy with the final product.